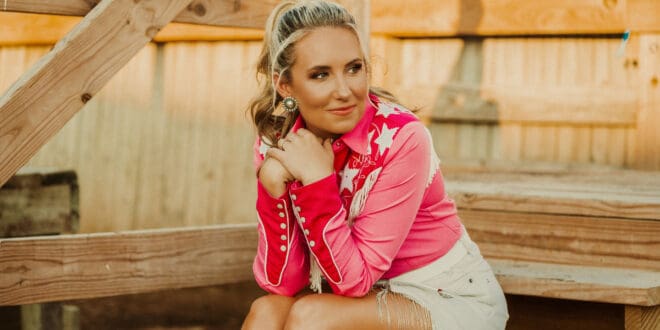 Amanda Kate Ferris won’t officially release the brand-new visualizer for her current track “Baby Don’t” until Friday (Nov. 4). But she has chosen to share the clip one day early for readers of Music Mayhem in this exclusive premiere.

Largely filmed by Clayton Birk inside The Studio at the Factory in Dallas, TX, this clip finds Ferris showing off her country girl swag while performing the flirtatious love song in front of a live audience. Dressed in a fringe denim ensemble, the rising country singer/songwriter is a real superstar as she engages the crowd with her energetic stage presence and fun-loving attitude. A full band of musicians backs her while she dances around on stage and mouths out the lyrics to the uptempo tune.

Along with the performance clips, viewers also get to see how “Baby Don’t” came together in the studio. In select scenes, footage shot by Austin Screws, shows Ferris laying down tracks in a studio outside of Nashville, Tenn., for her team and producer.

“I love this video showcasing my band in the studio and on stage. Being on stage is where I am home. I love putting on a show, and from the first time we tested out this song on stage, I knew it was going to be on the record,” Ferris tells Music Mayhem. “This song connects with my female audience, and I love that!!! Our live show is full of energy and incredible musical moments. I’ve got one of the most talented groups of musicians around me, from the studio to the stage. I’m one blessed cowgirl, and I know that! I hope everyone loves this as much as I do!”

The visualizer for “Baby Don’t” comes as Ferris is prepped to perform “The Star-Spangled Banner” for football fans as part of the Houston Texans game against the Philadelphia Eagles, which airs Thursday (Nov. 3) at 7:00 p.m. CT on Amazon Prime.

“So excited to share, I’ll be singing the national anthem for the Houston Texans game on Thursday, 11/3! And y’all can stream the game on NFL on Prime! NFL #ThursdayNightFootball,” Ferris captioned on Facebook, alongside a promotional photo for the big event.

Written by Liz Rose, Lori McKenna, and Hillary Lindsey, “Baby Don’t” is a bubbly love song that has one person telling the other not to tempt them and play with their emotions unless he/she wants to “talk” “kiss” or “fall like dominos.”

“‘Baby Don’t’ is reminiscent of the country songs that I grew up on and made me fall in love with the genre,” Ferris previously shared of the track in a press release. “It reminds me of early Reba McEntire and Shania Twain, two strong women who have greatly influenced my sound.”

Along with McEntire and Twain, Ferris was inspired by her mother, Kathy Wright, who was an artist and entertainer herself. Wright, who often collaborated with The Rat Pack, was one of the original members of the Golddiggers, a female singing and dancing troupe created for the 1960s TV program, The Dean Martin Show. Ferris has since turned her passion for music into a full-fledged career and has so far shared the stage with acts like Tracy Lawrence, Chase Rice, Warren Zeiders, Josh Abbott Band, and more.

“Baby Don’t” is just the first taste of what fans can expect from an upcoming batch of new music from Ferris. The track will be included in an upcoming full-length project that she promises “reflects her western influences, love of country music history, and authentic ranch lifestyle which she lives daily in her hometown of Midlothian, TX.”

Previous Miranda Lambert Adds Holiday Items To Wanda June Collection
Next CMT Music Awards To Be Held In Texas For The First-Time Ever In 2023, Host & First Performer Announced