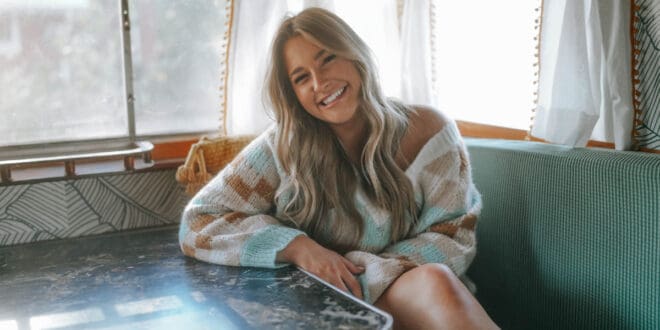 Erin Kinsey has released her brand-new song, “Boys In Boots,” and it’s bound to be one that folks jam along to in their cars all summer long.

A fun and effervescent tune, “Boys In Boots” puts the focus on boot-wearing cowboys and small-town males with a backroad, blue-collar kind of lifestyle. In the song, Kinsey shows off her bubbly personality and spunky side as she sings all about being partial to country boys over city slickers.

“Some girls like a boy born and raised in the city / The ones who never heard George Strait or Keith Whitley,” she begins name-checking the artists she grew up with while acknowledging that girls out there have their own preferences when it comes to the type of guys they choose.

Sonically, “Boys In Boots” features Kinsey unveiling her smooth and honeyed Texan vocals over a pop/country beat that offers a steady build into the chorus.

“‘Boys In Boots’ is a song that I wrote about a year ago and added to the live set in the summer,” Kinsey said, opening up about the song in a press release. “Even though I liked the song when we wrote it, over the last few months playing it live I have just fallen in love with it! It’s upbeat and so easy to get into, and it’s so much fun to watch the boys wearing cowboy boots in the crowd and the girls with their man in boots singing along. It’s like it brings the whole audience together!”

“Boys In Boots,” written by Kinsey with Jordan Minton and Travis Wood and produced by Jimmy Robbins, is the follow-up to fan favorites like, “Just Drive,” “Vegas” and “Reason For Leaving.”

“Come hang out with me LIVE at 10:30 pm CST as we count down to the release! I can’t wait to hear what y’all think 👀🫶,” Kinsey shared of the new track on Instagram ahead of its release.

Kinsey also included some fashionable cover art for the single. The photo, which goes along with her “Boys In Boots” release, features a pair of white boots resting near speakers, which are attached to a retro camper.

Kinsey may only be 22 years old, but she has been singing and songwriting for well over a decade. Hailing from Rockwall, Texas, the rising talent honed her musical skills while in her home state before establishing a firm footing in Nashville after graduating from high school.

One of the first highlights of Kinsey’s emerging career came with the release of “Pink” – a song she wrote with Victoria Shaw and Jodi Marr, which ended up getting recorded by Dolly Parton and her friends to benefit the Susan G. Komen breast cancer foundation.

Her persistence and talent led her to release several songs and grow a fan base organically. After receiving offers from record labels, she signed with Sony Music, RECORDS Nashville, and her star has been shining brighter ever since.

Be sure to listen to Kinsey’s “Boys In Boots” in the video above!

Previous HARDY Talks Internal Struggles That Led To His New Album Being Two Genres, How His Wife Has Unexpectedly Inspired His Music & More
Next Restless Road Releases Reflective Country Ballad “On My Way”