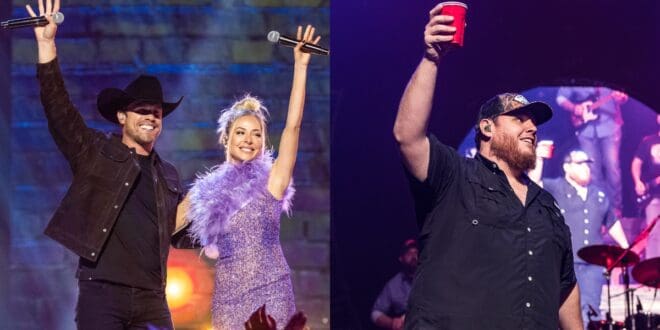 Country music star Dustin Lynch and Nashville newcomer Mackenzie Porter have made themselves comfortable at the top country charts with their breakup ballad, “Thinking ‘Bout You.” While sitting at No. 1 on the Billboard Country Airplay singles chart, the two waved goodbye to 2021.

However, a champagne toast is in order for the Broken Bow Records artist and the female powerhouse – as they kicked off 2022 by reaching a career milestone. After spending four consecutive weeks on top, they entered the New Year with their name still sprawled across the prestigious chart.

The smash-hit marks Mackenzie’s first No. 1 in the United States and Dustin’s eighth. As duet partners, they are walking in the fine footsteps of multi-platinum artist Luke Combs, as the last single to spend five weeks or more on Billboard’s Country Airplay chart was Combs’ award-winning wedding anthem, “Forever After All.”

While they rejoice in their rapid success, the two also scored the No. 1 spot on the Mediabase Country chart – officially making it their fourth straight week dominating the leading spot.

As of the first week of 2022, “Thinking ‘Bout You'” broke Luke Combs’ 2019 record for “Beautiful Crazy.” The moving melody from his deluxe record, This One’s For You Too, was the last country single to spend four uninterrupted weeks at No. 1.

The breakthrough single was penned by Lynch alongside Andy Albert, Hunter Phelps, and Will Weatherly. In a previous interview with Taste of Country, the Grand Ole Opry member confirmed that his fifth studio album is on its way and will feature the record-breaking hit featuring Mackenzie Porter.

“Me and Mackenzie Porter actually made the cut,” he laughed while giving her a knuckle touch before rattling off other notable names that fans will hear on the highly anticipated album. “So, our version of ‘Thinking ‘Bout You’ is on there. Of course, we released a couple more with Chris Lane with ‘Tequila On A Boat’ and ‘Huntin’ Land’ with Riley Green. So, there is a lot of magic happening on this album.”

The 36-year-old hitmaker continued to explain that he had a busy fall rubbing elbows with creatives in the studio. In fact, he confessed that he recorded a long roster of songs that will be kept safe in his music vault. “We actually have more songs recorded than what’s actually going to make this album,” he shared to host Evan Paul. “Hopefully, they will see the light of day further down the road in 2022.”

While a release date is still up in the air, he warned fans that a tour would be centered around the album launch. “We will be touring and will get to design a tour around this album release. So, I am really pumped up for all of that,” he shared while smiling ear to ear.

Until the country bachelor drops his record, fans can watch Lynch and MacKenzie bring the relatable single to life in their music video that garnered over five million views to date.