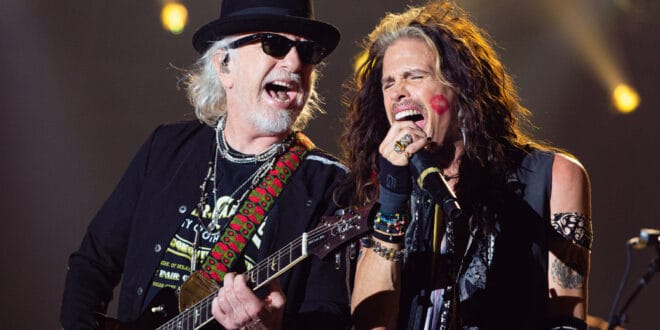 Aerosmith was forced to cancel their Deuces Are Wild Las Vegas residency concert at Dolby Live in Park MGM on Friday (Dec. 2) due to sudden illness.

According to a statement the band shared on social media, frontman Steven Tyler has fallen ill and is unable to take the stage.

“It is with great disappointment that we are forced to cancel tonight’s show in Las Vegas due to Steven feeling unwell and unable to perform,” the band wrote on Instagram.

The award-winning group promised fans that Tyler will be better and able to perform during their next scheduled Vegas residency date on Monday (Dec. 5).

The cancelation came just minutes before the show was scheduled to begin.

While the group did say that Steven Tyler has fallen ill, the band didn’t specify what he is sick with.

Tickets purchased through Ticketmaster.com for the December 2 concert will be automatically refunded. All other refunds will be available at point of purchase.

Aerosmith’s Deuces Are Wild Las Vegas residency kicked off on September 14 at Dolby Live in Park MGM. The residency is described as an “electrifying 90-minute live performance from the band who continue to deliver one of the most innovative and thrilling performances in music.”

The 90-minute show features “exclusive, unreleased audio and never-before-seen visuals from Aerosmith’s archives,” according to a press release. The released also states that “the residency is the first live concert experience presented in Dolby Atmos® at Dolby Live. Dolby Live is one of the world’s most technologically advanced performance venues for enjoying live music in Dolby Atmos.”

The band’s Las Vegas residency is scheduled to run through December 11. Tickets for the final shows can be purchased online at ticketmaster.com/aerosmith.

Additionally, Aerosmith recently made history with their concert at Fenway Park. The show, which sold-out with 38,700 fans in attendance, broke the record for most tickets sold at the venue to date. The concert also kicked off the band’s 50th-anniversary celebrations.

“Thank you, Boston!! You broke the record for the most tickets for any event in the 110-year history of Fenway Park! 50 years and still rocking!!,” the band wrote at the time, celebrating the historic show.

The best-selling American rock band of all time recently gathered together to celebrate their iconic recordings being unified in one place for the first time in Aerosmith’s history through a multi-faceted close working relationship with Universal Music Group (UMG).

“It’s been a long road but I’m extremely happy and proud to say on behalf of Aerosmith we have been able to bring our 50 years of music under one roof by partnering with UMG,” co-founder and lead guitarist Joe Perry shared at the time of the announcement. “This will allow us to bring our music to our fans in ways we never were able to before. It’s something we’ve dreamed about happening for a long time. It’s a win for Aerosmith, UMG, and, ultimately, our fans. Needless to say, we are very excited. It’s an incredible way to celebrate 50 years and the many more years to come.”

In addition to supporting the band’s consolidated catalog, this partnership will also make use of unprecedented access to the storied ‘Vindaloo Vaults’ and personal archives of band members Steven Tyler, Joe Perry, Tom Hamilton, Joey Kramer and Brad Whitford, who will actively help curate their collections of music, photos, video footage, artwork, journals, set lists and memorabilia. Future releases will offer fans access to never-before seen and heard gems, that will further cement the band’s position as one of rock’s most ground-breaking and reverential groups in history.

UMG will also be the home of future music projects, as well as work with the band to develop, produce and distribute new film, television and other audiovisual content projects celebrating Aerosmith’s history and significant cultural impact. The partnership expects to announce details of those new music and audiovisual projects shortly. UMG will work hand in hand with the band to continue to introduce Aerosmith and their rich musical legacy to new generations of fans around the world.

Since Aerosmith’s founding 50 years ago, the group has gone on to sell more than 150 million albums around the world; produced genre-defining music videos such as “Amazing,” “Crazy,” “Janie’s Got A Gun,” “Livin’ on the Edge,” and “Love in an Elevator;” launched extravagant record-shattering global tours, most recently with their ongoing smash hit Las Vegas residency. The band has broken numerous boundaries, including becoming the first rock band with a massive commercially successful hip-hop collaboration with Run DMC on “Walk This Way” and the first hard rock band to appear during a Super Bowl Halftime Show with their 2001 performance, and in 1999, Aerosmith became the first band to have their own themed attraction at Disney World in Florida, and later Paris with the launch of the Rock ‘N’ Roller coaster starring Aerosmith.

With broad cultural influence, Aerosmith has prominently appeared in films, television shows and video games, as well as influencing multiple generations of rock bands, both as style icons and acclaimed multi-instrumentalists. MusiCares honored the band in 2020 as Person of the Year for their many artistic achievements and dedication to philanthropy, including Steven Tyler’s initiative Janie’s Fund initiative, which supports young women who’ve suffered the trauma of abuse and neglect.

The partnership significantly expands Aerosmith’s historic relationship with UMG. The band recorded some of its biggest-selling albums for Geffen Records, including Done with Mirrors (1985), Permanent Vacation (1987), Pump (1989) and Get a Grip (1993). Aerosmith additionally works with Bravado’s Epic Rights for merchandise and has previously released concert films through Eagle Rock Entertainment. Additionally, Aerosmith is part of UMG’s partnership with YouTube bringing music videos into current video and audio standards, with recent releases including “Dude Looks Like a Lady” and “Dream On.”

Inducted into the Rock and Roll Hall of Fame in 2001, Aerosmith is tied for the most RIAA album certifications by an American group with 25 Gold, 18 Platinum, 12 multi-Platinum and one diamond. As the band was founded in Boston in 1970, April 13 has been declared “Aerosmith Day” in Massachusetts by former Governor William Weld. 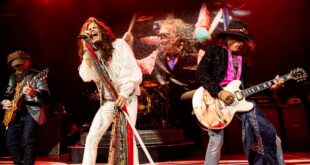 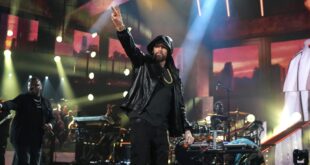 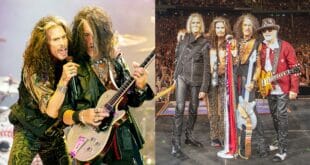