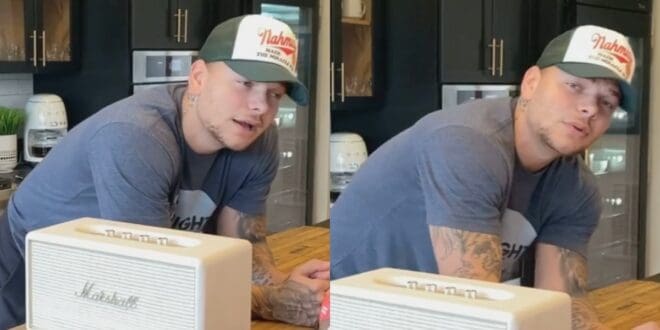 Kane Brown is gearing up to release lots of new music in 2022 and the first new song drops mid-January.

The hitmaker revealed the exciting news of his new song “Whiskey Sour” throughout social media on Sunday (Dec. 26) via a video, which he captioned, “I love getting to sing other people’s stories! This is my next song to release January 14th tag a friend.” The caption also included the hashtag #WhiskeySour, which is the name of the forthcoming new song.

The video, shared by Brown, finds the country superstar in the kitchen of his Tennessee home singing along to the unreleased new song, which was playing through a Marshall Amp speaker situated on the countertop beside him.

“We were two heartbeats away from wedding rings and a pretty ball gown dress / At the church off 40 West,” Brown sings during the first verse. “We were talking ’bout our future on the steps of your daddy’s screened-in porch / If I’d asked, you’d tell me yes…”

As Brown noted in the caption, this song in particular tells another couple’s story and not his.

“Well it only took a month or so to be someone you used to know / you didn’t really have to go, but you did / And I never been a somber soul but part of me ain’t here no more / and I’ve been trying to find ’em ever since,” Brown continues to sing. “So now I take my whiskey sour sittin’ bar side after hours / thinking how could I get over if the love was never ours / I know you got my message all my x’s and my o’s / and it kills me by the hour / now I take my whiskey sours alone…”

Listen to the teaser clip of “Whiskey Sour” below.

i love getting to sing other people’s stories! this is my next song to release January 14th tag a friend 🔥 #whiskeysour

Since sharing the clip on social media, fans have flooded the comments, gushing over the unreleased track that they are eagerly awaiting Brown to release.

One fan commenting, “beautiful song,” while another added, “THIS is the Kane we need 😍.”

The heartfelt tune even had fans telling the singer how the track will bring tears to their eyes, as one fan commented, “this song is going to have me crying,”

Brown has been teasing fans with unreleased new music for quite some time since the release of his EP, Mixtape Vol. 1.

The hitmaker has previously teased unreleased songs including an untitled rap song, “Leave You Alone,” “I Can’t Love You Anymore,” “Something I’d Love To See,” “Riot,” “Nothing ‘Bout Loving You I’d Change” and “Drunk or Dreaming” and more.

Over the course of the last few months, Brown has been teasing fans with small clips of unreleased songs on social media which we’ve recently compiled a list of songs he teased that we hope will appear on his forthcoming new album, which you can check out HERE.

The yet-to-be announced album will follow Brown’s ACM-nominated EP, Mixtape Vol. 1, which was released on August 14, 2021, via RCA Nashville/Zone 4. The EP has gone on to earn several hit singles including “Cool Again,” “Worldwide Beautiful” “Worship You” and his Top 40 radio single, “Be Like That” featuring Khalid and Swae Lee.

Previously, Brown shared that the new record will include “12-15 songs,” all brand-new tracks except for including his chart-topping single “Worship You.”

“I can’t give away too much yet on the new music but I def want to keep pushing myself and making music for my fans,” Brown exclusively told Music Mayhem. “I think it will surprise people, but it’s still me.”

Recently, Brown joined Kelleigh Bannen for the year-end episode of Today’s Country Radio on Apple Music Country, where he revealed that he decided to push back the album’s release date because he wanted to play around with different styles and make each song different from one another. “I will say I pushed it back literally the other day. I think I am going to release songs hopefully once every other month leading up to it,” he shared. “None of them sound the same, which is another thing that I’ve been thinking about.”

Additionally, the “Worship You” singer is currently in the midst of his massive 35-date headlining ‘Blessed & Free Tour,’ The tour kicked off on October 1 in Sacramento and will visit all 29 NBA basketball arenas throughout 2021 and 2022, marking the first country artist in history to headline every NBA basketball arena on a single tour.

“Whiskey Sour” will be available everywhere on January 14.