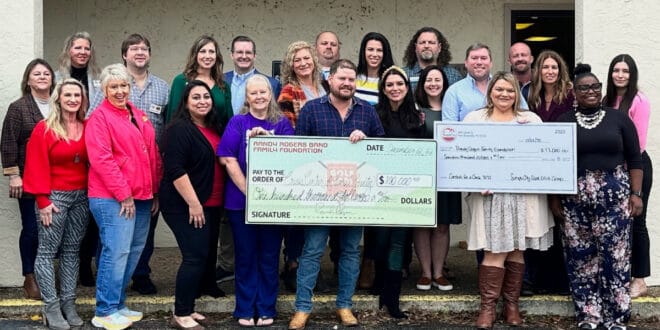 Rogers and his wife Chelsea showed their support for hometown New Braunfels, TX on December 12 with a generous donation of $100,000 of the funds to the Crisis Center of Comal County, an organization that supports and protects the victims of domestic violence and sexual abuse.

Rogers has always been motivated to disperse funds raised by RRFF inside the community, shared the singer in an interview with the New Braunfels Herald-Zeitung newspaper. This year, Rogers chose to aid in the rebuilding of the Crisis Center after disaster struck in the form of a fire this past April.

“I wanted to impact the people that need it the most in our community, and after [the Crisis Center] burned down and I saw the need, I just decided that this is where I wanted to put it,” shared Rogers. “This was a safe place to put it and it’s a safe place for lots of people.”

This year’s RRB Golf Jam, held on October 23-24 at Spring Branch, TX’s River Crossing Golf Club and presented by Shiner, included a golf tournament, silent auction and performances by Randy Rogers, Randy Montana and Jim Beavers. Bidders were offered prizes including the opportunity to write a song with Rogers and Wade Bowen, the chance to hunt with Parker McCollum, a tour-bus road trip to play golf with Rogers and Les Lawless, luxurious vacations and more.

Additional funds raised will be given to the Kent Finlay Legacy Endowment — a memorial fund created to honor the late founder of Cheatham Street Warehouse, a San Marcos music venue — and will provide scholarships for Texas State University students pursuing music business degrees.

Founded in 2009 by Randy Rogers Band, the RRB Golf Jam aims to utilize the group’s platform for the greater good. Since 2018, RRB has more than tripled in size, supporting charities across the country while maintaining focus on the worthy organizations located right in the heart of the New Braunfels community. Created in 2019, RRFF serves as a collection center, working to gather the donations from the band’s charitable endeavors and support community needs.

“Homecoming is a renaissance orchestrated by Radney Foster,” explained Rogers. “We went back to our roots working with Radney again as well as recording this record at two iconic studios that produced some of our most successful music. Dance with the one that brought you.”

The hitmakers are set to grace the Nashville’s iconic Ryman Auditorium stage on March 2 for a performance with Pat Green and William Beckmann.

Previous Craig Campbell Becomes Eagleville City Councilman: “I Decided To Run For City Council… And Won!”
Next Bailey Zimmerman Admits He “Started Crying” When He Found Out Morgan Wallen Is Taking Him On Tour