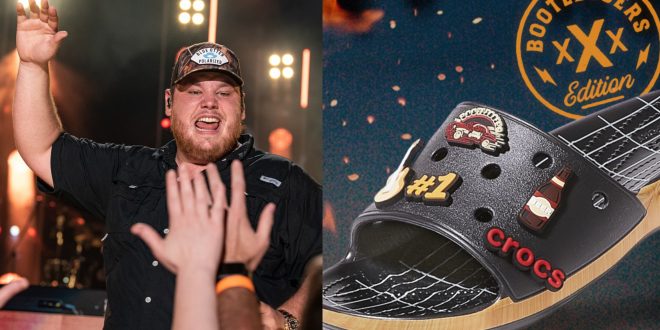 Luke Combs partnered up in the past with the footwear brand, Crocs, to create his own custom signature style.

Combs first partnership with the brand was for a pair of limited-edition camouflage Croc classic clog shoes at the 2019 CMA Festival. The shoes were exclusively sold during the weekend of the 2019 CMA Fest at the Crocs booth, located on Broadway between 2nd Ave and 3rd Ave in Nashville and quantities were limited. The shoe brought out hundreds of diehard fans waiting in lines for their chance to purchase the clog. The designs on the clog were inspired by and featured designs inspired by his guitar.

“I’ve worn Crocs for a long time, and no one loves them as much as me, so getting the chance to design my own pair of the Classic Clog is cool as hell,” the country star said in a press release upon release of the first partnership. “I had so much fun creating these and hope fans have just as much fun wearing them.”

On Tuesday (July 14) the footwear brand announced that the country star will be collaborating with them again, this time for a pair of Combs’ inspired slides. The shoe will be sold starting on July 21, and in honor of this collaboration, Luke Combs and Crocs have donated to Musicians On Call, an organization that delivers the healing power of music to hospitals across the country.

Fans can sign up to be notified of the on-sale HERE.

Previous Morgan Wallen Reveals He Is A Dad to Just-Born Baby Boy: “I’ll Be The Dad You Deserve”
Next Falling In Reverse Unveil New Song “Carry On,” A Track That Was Originally Supposed To Be Their ‘Coming Home’ Album