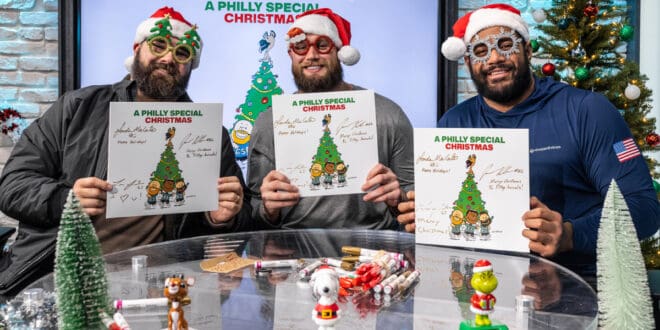 A trio of Philadelphia Eagles linemen are getting into the Christmas spirit this year. Jason Kelce, Lane Johnson and Jordan Mailata recruited drummer Charlie Hall from The War on Drugs to record their own Christmas album. A Philly Special Christmas arrives on December 23 via Vera Y Records and proceeds will be donated to Children’s Crisis Treatment Center in Philadelphia. Funds will be used for a holiday toy drive.

“This record was born out of friendship and a love of Philadelphia. We wanted to create something special that would bring people together during the holidays,” a message from Kelce, Johnson and Mailata read on the album’s official website. “May you listen to this record with your family and friends, and feel the same joy and happiness we felt making it.”

Each Friday leading up to the release, a new song will be available for fans to hear. The first, “Christmas (Baby Please Come Home),” came out last week. “Blue Christmas” marked the project’s second released, which came out on December 2.

If your Holiday Spirit is a little more somber this year, you’ll enjoy our latest release from the album. @LaneJohnson65 has the perfect sultry, silky, baritone voice that’s filled with the emotion that hits just right. https://t.co/dl6XueTPY2

The guys didn’t go at this cold. They enlisted the help of a vocal trainer. It seems that Jordan Mailata is the star of the group. They released a brief film discussing the process.

“I think Jordan’s just playing football to launch his singing career,” Kelce says. “I think some people choose American Idol as their start, and he’s like, ‘I’m going to make millions of dollars playing left tackle and then go into singing.’ I think he’s actually a genius.”

The idea for the project was largely Kelce’s. It was something he really wanted to do, but he was a bit intimidated by doing it alone.

“I love Christmas and I had an idea that doing a Christmas album would be great,” he says. “The problem is I can’t sing, so I knew I was going to coax guys that could sing into coming in and doing this.”

It seems like he knew just who to call.

Charlie Hall has plenty of experience around musicians, and he thought the project went well.

The Philadelphia Eagles are having an historic season. Kelce and company invited a few other players to make appearances on the album, including quarterback Jalen Hurts. On one track, Kelce asks Hurts, “What’s on your Christmas list?’ to which the quarterback replies, “You know what’s on my Christmas list. A Super Bowl.”

He’s going to have a great shot at getting his wish. Heading into their final four games of the season, the Philadelphia Eagles sit atop the league’s best division with an 11-1 record. The division has been so good this season, in fact, that each of its teams may make the playoffs. The Dallas Cowboys will almost certainly clinch the top Wild Card spot, while the New York Giants and Washington Commanders remain in the thick of it. Next up for the Eagles is a division showdown with the Giants on Sunday. The Eagles enter the game as a seven point favorite.