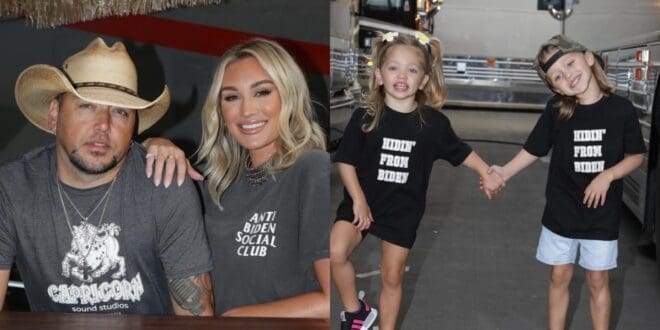 Brittany and Jason Aldean are once again vocalizing their opinion on President Biden. However, they are making it a family affair by putting their two young children in “Anti-Biden” tees this time around.

To follow, Aldean’s wife shared other photos to her personal Instagram account featuring their children – Navy (2) and Memphis (3). The two kids were hand-in-hand sporting matching t-shirts with “Hidin’ from Biden” written across the front. Another photo was Brittany showcasing the back of her “Anti Biden Social Club” tee with her three-year-old son beside her holding a powerful two thumbs up.

“Rockin that @letmetakeyourselfie merch,” says Brittany in the caption and tagging the pro-trump clothing brand. She even took to her Instagram story to share the link to DaddyT45 – the controversial website that sells the propaganda apparel.

In the mix of all of this, the country music superstar was not photographed with his children. While the couple quickly received backlash, there were also several musicians and republicans who showed praise in the comments. “Omgggg… I love you wayyyy too much!” Candace Owens. Real Housewives of Atlanta star Kim Zolciak – Biermann and RaeLynn showed support with heart-eye emojis.

This is not Brittany’s first rodeo, as she has become brand loyal to the clothing line. Just a week before the photos surfaced, she was seen wearing a pro-Trump shirt. The patriotic tee has “USA” written on the front in red, white, and blue, and on the back has her name and “45” [Trump being the 45th President of the United States] in big, bold letters. The message on the shirt was so loud, that it even received attention from Donald Trump Jr.

The country music wife has always been very vocal about her thoughts, as she recently spoke out about the 13 American soldiers who were tragically killed overseas. “I personally don’t give a damn if people don’t agree with me. I think it’s important now more than ever to stand for what you believe, even if it “goes against the grain,” she told Fox News.

Following the 2020 presidential election, she was on social media wearing “Still my President” gear. The beloved musician is the same way, as he has “Jason Aldean ’24 – Get the BS out of the US” tee at every merch table at his star-studded concerts. Fans can even purchase the political forward clothing on his website. 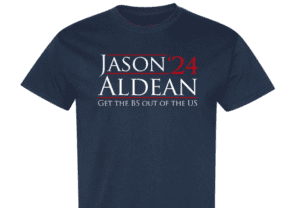 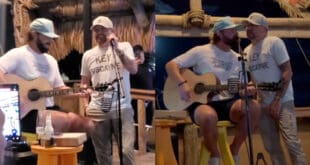 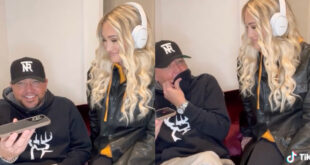 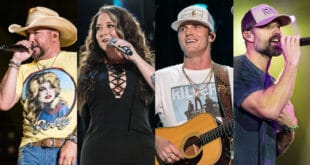