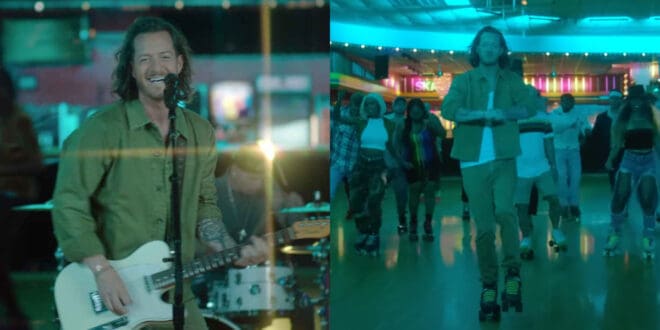 Tyler Hubbard; Photo Courtesy of "Baby Gets Her Lovin’"/YouTube

Tyler Hubbard dropped a funky new music video for track “Baby Gets Her Lovin’” from his six-song project, Dancin’ In the Country!

Watch the unofficial music video for “Baby Gets Her Lovin’” below.

The groovy love song, co-penned by Hubbard, Jesse Frasure and Canaan Smith, and co-produced by Hubbard, is a track that Hubbard describes as a “really fun song I can envision everyone line dancing to.”

The concept for the video came straight from the EMI Records Nashville recording artist – swaggering roller-skating mixed with classic country honky-tonk. Hubbard grew up roller-skating each weekend in Lawrenceville, GA at the Sparkles Family Fun Center. Skating was such a huge part of his youth that the singer still has his high school roller skates, which he sports in the video.

“For the ‘Baby Gets Her Lovin’’ video we wanted to shoot something unique and kinda different. We took it to a skating rink, brought in the band, and had a party,” Hubbard captioned an Instagram video.

Filmed in Nashville, the high energy video choreographed by Lauren Willimason combines Hubbard’s band with a mix of local talent, line-dancers and various skaters from Atlanta. Hubbard even cast a few of the local skaters himself after meeting them while practicing for the video shoot. Hubbard had such a blast shooting for “Baby Gets Her Lovin’” that he invited several of the dancers and skaters to take part in the “Everybody Needs A Bar” video that was filmed later that day.

“I wanted to shoot a video that was visually unique and different, and that really represented the feeling of the song, so we took it to the skating rink and mixed it up a bit,” said Hubbard. “There is a groove to the music where I could see people skating and line dancing and just really moving with fluidity to the song. We had a big party at the skating rink and had a great time shooting the video. It was special to me too, because I grew up going to the skating rink as a kid – I actually skated all the way through high school. So, it was nostalgic for me to go back to a skating rink, shoot a music video and bring back some of the elements of my childhood that I loved. It also gave me a chance to dust off my skates, which was something I hadn’t done in a while.”

The “Undivided” singer’s first six-song project Dancin’ In The Country reached over 10,000 SPS units, coming in as the second best-selling country EP debut of the year. The project hit No.1 on the Heatseekers Albums chart, No.6 on the Current Country Albums sales chart and No. 107 on Billboard’s Top 200 chart.

“5 Foot 9,” the singer’s debut single as a solo artist, has already secured 159M LTD streams and now sits at the No.4 spot at country radio. The track also remains at the No.6 spot on the Country Streaming Chart.

Amidst his new releases, Hubbard has graced the stage on Keith Urban’s “THE SPEED OF NOW WORLD TOUR” alongside 3x GRAMMY-nominated star Ingrid Andress. 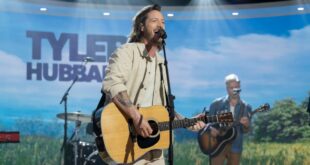 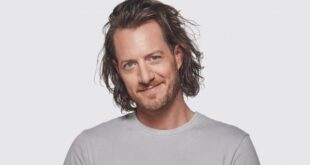 Tyler Hubbard’s At-Home Dance Parties Inspired “Dancin’ In The Country,” Which Was Co-Written By Keith Urban 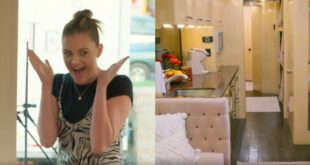