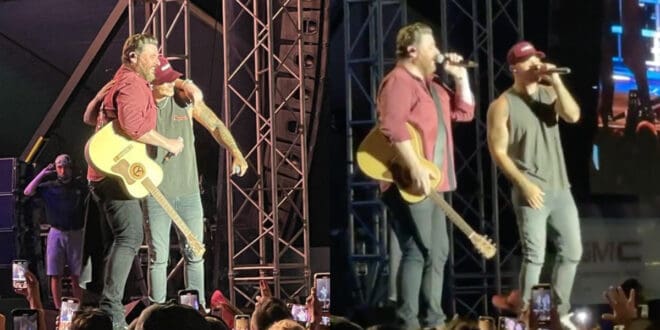 Kane Brown surprised Chris Young for an unannounced performance of their collaborative track in Pennsylvania!

During Young’s headlining performance on Sunday (Aug. 29) at Citadel Country Spirit USA, the Tennessee native surprised the near-capacity crowd with a special appearance from his collaborator Kane Brown to perform “Famous Friends.”

Brown even changed up the lyrics to perfectly fit the festivals location signing “Chester county” during the chorus.

Young and Brown ended concluded their performance with a big ol bear hug.

“Thank you, I love you guys,” Brown said as the superstar pair exited the stage.

Watch Young perform with his famous friend below.

“Famous Friends” was co-written by Young alongside Cary Barlowe and Corey Crowder. The song appears on Young’s latest project of the same name.

Young shared his excitement for Brown surprising the crowd and him during his performance tonight in Pennsylvania.

“Thanks @kanebrown_music for showing up to sing #FamousFriends with me tonight in PA!” Young captioned a a photo of him and Brown. “Evidently it’s tradition when I’m surprised to pick someone up over my head!”

Young released the duet with Brown in late November 2020, the song finds both Brown and Young trading vocals while dropping the names of some of their “famous friends” and the three counties that mean a lot to them including Rutherford County in Young’s hometown of Murfreesboro, TN, Kane’s hometown of Hamilton County (on the Tennessee and Georgia border) and Davidson County which is Nashville where both of the singers currently live.

The duet comes as a “full circle” moment for Brown as he previously admitted that Young “really helped” him find his “voice” and is ultimately who “got him into singing.” Since the song was written, Young said there was no one else he’d rather have on the track than his own famous friend Kane Brown.