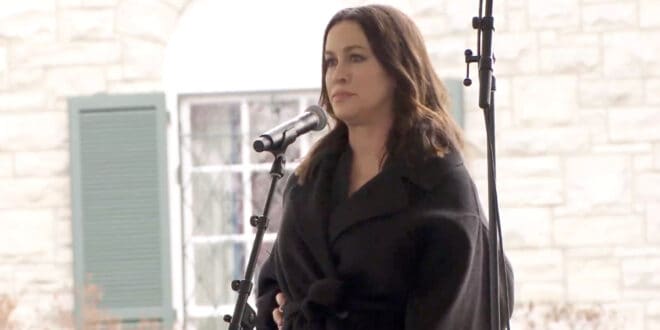 Alanis Morissette honored the late Lisa Marie Presley with a heartfelt tribute performance during A Celebration of the Life of Lisa Marie Presley, held at the iconic Graceland mansion on Sunday (Jan. 22) in Memphis, Tennessee.

During the late singer/songwriter’s public memorial service at Graceland, Morissette took to the stage with a pianist to perform her 2021 single “Rest,” a song co-written by Morissette and Michael Farrell. The song, produced by Alex Hope, first premiered live in 2017, when Morissette debuted the tune at a tribute concert in memory of the late Chester Bennington, who passed away that same year.

“And God rest, God rest our souls / And this substance is the only comfort I know / He’s been pushing for a while / Can we cut this man some slack / Let him lie down, let him lie down,” Morissette sang on the chorus.

Watch Alanis Morissette’s Performance Below At The 41:00 Minute Mark.

Hundreds of family, friends and fans gathered on the Graceland property to pay their respects to the late “Lights Out” singer. Those in attendance included her mother, Priscilla Presley, her surviving children, 33-year-old daughter, Riley Keough, and 14-year-old twins, Finley and Harper Lockwood.

In addition, several of her famous friends also attended to honor her, including Morissette, Axl Rose of Guns N’ Roses, Smashing Pumpkins’ Billy Corgan, as well as the Duchess of York, Sarah Ferguson, and Elvis actor, Austin Butler.

She was remembered by her family and friends with music and memories during the public memorial service on the Graceland property.

Lisa Marie was laid to rest next to her late son, Benjamin Keough, who died by suicide in 2020, in Meditation Garden at Elvis’ iconic Graceland mansion. Elvis, known as “The King Of Rock ‘n Roll,” as well as his parents, Vernon and Gladys Presley, are also buried in the Meditation Garden.

While her official cause of death has yet to be revealed, TMZ reported that Lisa Marie’s housekeeper found her unresponsive in her bedroom, where ex-husband, Danny Keough, who lived with Lisa Marie Presley, administered CPR until paramedics arrived.

PEOPLE reported that the 54-year-old mother of four was not breathing when paramedics arrived to her home, so they performed CPR and noted that she had “signs of life” and sent her to a local hospital for “immediate medical care.” She was then transported to a local hospital, where she was placed into a medically induced coma, and was listed in critical condition on life support in the Intensive Care Unit (ICU).

She later passed away at the hospital with her mother and daughter by her side.

“It is with a heavy heart that I must share the devastating news that my beautiful daughter Lisa Marie has left us,” Priscilla previously shared in a statement to PEOPLE, confirming the death of Lisa Marie. “She was the most passionate strong and loving woman I have ever known. We ask for privacy as we try to deal with this profound loss. Thank you for the love and prayers. At this time there will be no further comment.”

Lisa Marie Presley is the only child of Elvis and Priscilla. She followed in her father’s footsteps as a singer and songwriter. She has released three albums, including To Whom It May Concern (2003), Now What (2005), as well as Storm & Grace (2012).

Presley also released several singles that didn’t appear on a project, including posthumous duets with her father.

Lisa Marie made her Grand Ole Opry debut in 2012 in support of her Storm & Grace album. In a 2012 interview with Billboard, she shared her excitement over being accepted in Music City.

“I have been so blown away at the reception. It’s been so warm and incredible coming here. I feel really at ease,” she said. “To be in a place that appreciates singer-songwriters is an incredible experience. That doesn’t happen so much in Los Angeles. It’s been overwhelming. I feel very honored and lucky.” 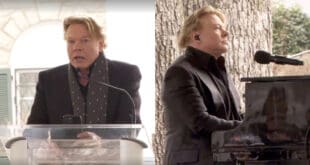 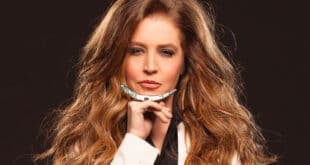 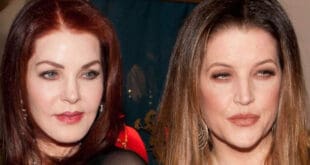