Tonight Alive is celebrating the release of their album Underworld today. Full of unique melodies, heavy hitting rock sounds and the undeniable vocal magic of singer Jenna McDougall, this album marks a turning point for the band both sonically and personally. It is full of moments that pushed the band to express the best and worst parts of themselves and features guest vocals from Lynn Gunn (PVRIS) and Corey Taylor (Slipknot, Stone Sour.) Already heralded by press as some of the band’s best work to date, Underworld is available today on Spotify, Apple Music and iTunes. Physical albums and merch bundles are available at http://smarturl.it/TAUWmerch.

On the release, McDougall shares “Underworld is a record about meeting and making peace with your dark side. Writing it required a journey into the uncharted territory of the Shadow Self; all that has been neglected and abandoned. It’s essence says that ultimately our deepest healing happens in the most painful periods of our life.”
The band’s latest single, “Disappear” premiered last week  as Annie Mac’s Hottest Record on BBC Radio 1. The super-charged track joins previously released singles “Crack My Heart” and “Temple.” All three tracks have been seeing incredible streaming success with adds to Spotify’s Rock This, Femme Fatale, The Scene, Pop Punk’s Not Dead and Crash Course Playlists in the US, coveted New Music Friday adds in Thailand, Mexico and Italy, an appearance on Google Play’s Today’s Top Alternative Hits chart, as well as spots on Apple Music’s Best of the Week and A-List: Rock Playlists in the UK.
After a performance and record release party at Unify Gathering, Tonight Alive will be returning to the United States for a Co-Headlining Tour with Silverstein to perform these tracks live for the first time. With support from Broadside and Picturesque, The Get Free Tour will kick off in Cleveland, OH on January 19th and travel to cities all around the United States before wrapping up on March 1st in Pittsburgh, PA. Tickets are on sale now at http://tonightalive.com/.
Upcoming Tonight Alive Tour Dates:
1/13 – South Gippsland – Unify 2018
1/19 – Cleveland, OH @ House of Blues *
1/20 – Cincinnati, OH @ Bogart’s * 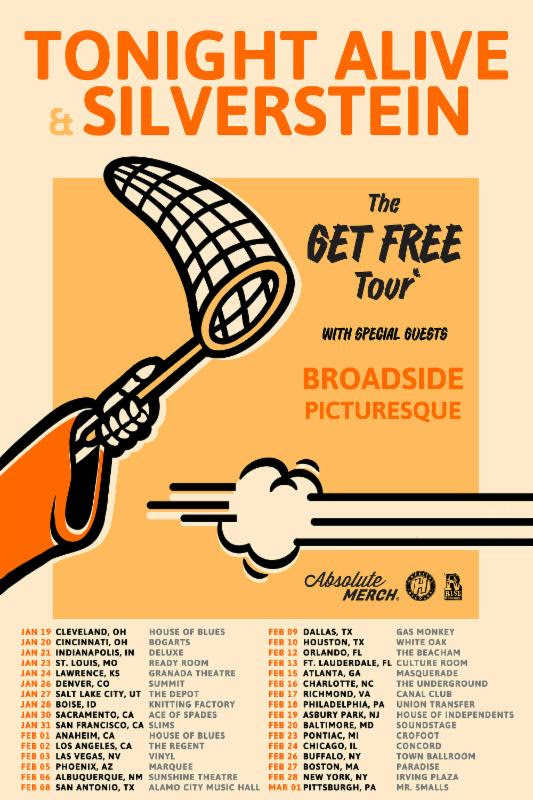