Multi-platinum rock band Shinedown has announced ‘An Evening With Shinedown’ live dates -an intimate, limited run of shows kicking off May 6th in New Orleans. These nine special shows will offer fans an exclusive, up-close-and-personal live experience amidst the 2019 ATTENTION ATTENTION World Tour, which will see Shinedown pack arenas backed by their biggest, most eye-popping production yet. Following the high demand for tickets to Shinedown’s three intimate, year-end shows at the House of Blues in Orlando on December 27-29, the band is thrilled to be bringing ‘An Evening With Shinedown’ to select cities around the country.

Fan club pre-sale tickets will be available December 4th at 10am local time, venue and radio pre-sale tickets will be available December 6th at 10am local time. General on-sale begins December 7th at 10am local time. Full routing below. For all ticket details, please visit www.shinedown.com.
Additionally, Shinedown will return to their roots in Jacksonville, FL, for an epic set at Welcome to Rockville on May 4th at Metropolitan Park. Tickets go on sale December 7th at noon ET.
Shinedown‘s uplifting new anthem “GET UP” (PRESS HERE) has been moving listeners around the globe with its offer of hope, empathy and encouragement in the face of personal struggles, whatever they may be.Offering a light in a time of darkness is somethingfront man Brent Smith is deeply connected to after battling his own personal demons, and “GET UP” was born out of watching his friend, Shinedown bassist Eric Bass, deal with clinical depression. When Brent put pen to paper, a beautiful, universal song rooted in Brent and Eric’s raw vulnerability took shape. Reaching far beyond any genre or label,“GET UP” speaks to the human spirit in a time of need, and it’s a song that has already resonated with the masses – becoming a fan favorite at arena shows on tour where the crowd response is palpable. It has drawn attention from the likes of Huffington Post, Salon, Rolling Stone, Buzzfeed, Parade, Grammy.com, No Depression and more, is approaching 20 million total streams with key playlisting on Spotify and Apple Music, recently hit #1 at Active Rock Radio, is quickly climbing at Alternative Radio and broke a new record for Shinedown, giving the band the most Rock Airplay Top 10s ever and their 13th #1 on Billboard’s Mainstream Rock Songs Chart, the second most in the history of the chart (tied with Van Halen).
Shinedown’s chart-topping album ATTENTION ATTENTION (PRESS HERE to listen), out now via Atlantic Records, simultaneously hit #1 on Billboard’s Alternative, Top Rock and Hard Rock Albums Charts and debuted Top 5 on the Billboard 200 and #1 on iTunes. The story that unfolds as the album progresses is a poignant and enduring statement about humanity, touching on topics such as overcoming struggles, mental health, not being afraid to fail and the resolve of the human spirit as seen on tracks like the #1 Active Rock hit “DEVIL”and the anthemic “THE HUMAN RADIO.” Given the deeply personal nature of the record, Shinedown went in-house for production for the first time ever, enlisting bassist Eric Bass to produce and mix the album in its entirety.
After delivering one of the biggest rock tours of the summer, Shinedown is now receiving glowing reviews overseas on their sold-out headlining UK/Europe tour set to wrap on December 7th in Kazan, Russia. Tickets for the 2019 ATTENTION ATTENTION World Tour are on sale now, with special guests Papa Roach and Asking Alexandria. For ticketing info, please visit www.shinedown.com. 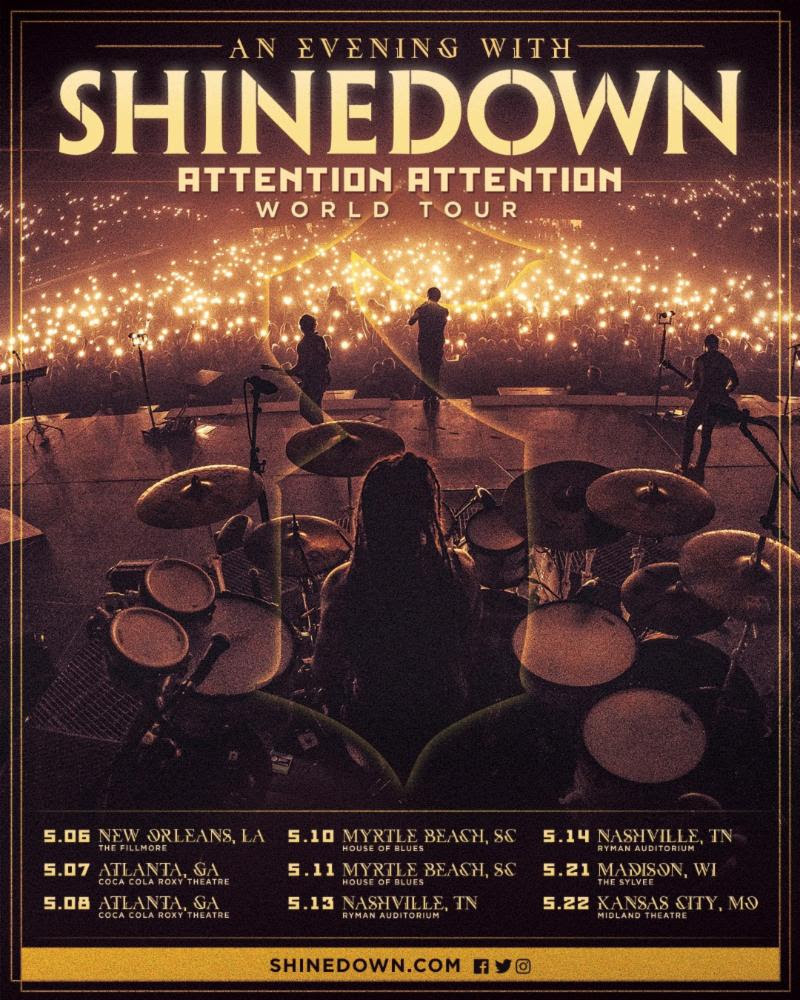