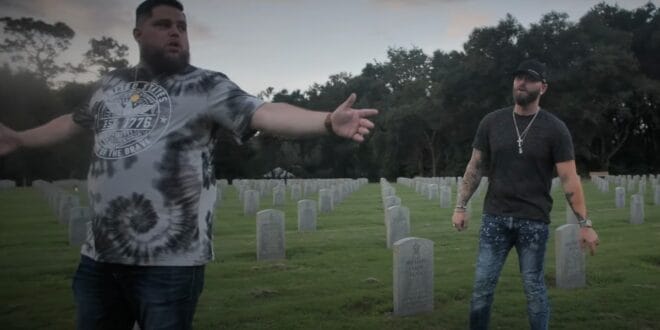 The horrific terrorist attack occurred just hours after the Western government warned its people to stay far away from the airport. While thousands of Afghan allies and foreign nationals attempted to flee the country following the Taliban takeover, two suicide bombers struck.

After almost 20 years of warfare in Afghanistan, President Biden pulled the troops out of the country and said, “We’re outraged as well as heartbroken. To those who carried out this attack, as well as anyone who wishes America harm, know this.”

“We will not forgive. We will not forget. We will hunt you down and make you pay. I will defend our interests and our people with every measure at my command,” he adds, while directing his comments towards the attackers.

Following the White House address – country newcomers, Rick Lynn was heartbroken about the fallen soldiers, but outraged about the “silence” around the incident. Therefore, Rick Lynn was inspired to use the power of music and his platform to highlight the brave men and women who lost their lives fighting for our freedom.

While Lynn’s creative wheels began to turn, he received a random phone call from good friend, Kendall Tucker – who was having the same thoughts and pondering the idea to pen a tribute track.

“It’s funny, I was literally having a conversation with my brother about how I’d like to do a song about the 13 soldiers who died, and it was within two hours Rick called me and said, ‘How would you like to jump on this song? I have an idea,” said Tucker a local outlet. “I was literally just talking about that. It was like it was meant to be when he called. I was game,” he adds.

Shortly after, Lynn and Tucker put pen to paper to write the recently released track, ’13 Reasons Why.’

“We didn’t like the direction that everything was happening,” says Lynn to Citrus County. “With people not talking about the 13 fallen soldiers, we just feel like it kind of got hushed.” In less than 24 hours, the heavy anthem that serves as a friendly nod to the fearless military and their families was recorded and released on September 9.

The two rising musicians vowed that any money earned from the single would go straight towards the mourning families. The tribute resonated with Americans nationwide, leaving Lynn and Kendall no other choice than to release a moving music video to shine a light on the heartfelt message and to keep up the positive momentum.

Within the music video – the duo is seen singing the single in the middle of a military cemetery, paying respect. Throughout the short clip, the men show footage of the armed forces fighting overseas.

Keep scrolling and honor the courageous 13 men and women who passed away during the violent attack.

Previous Blink-182’s Mark Hoppus Reveals That He Is Officially Cancer Free: “I Feel So Blessed”
Next WATCH: Jessie James Decker Washes Away Heartbreak In “Not In Love With You” Music Video