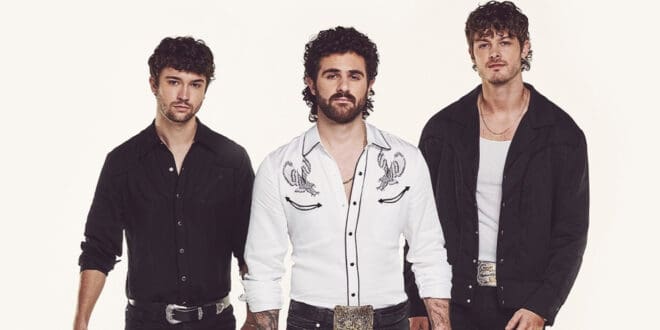 After testing the waters with an unreleased song in their live shows, Restless Road has officially dropped “On My Way,” out today (Jan. 20).

“On My Way” is a reflective country ballad that finds the fast-rising country trio, composed of Zach Beeken, Garret Nichols, and Colton Pack, looking for ways in which they can improve themselves, whether it be choosing better words, breaking certain habits, or keeping every promise they make. While the trio intends on becoming better versions of who they are, they don’t feel the pressure to have it all figured out as they admit they’re not quite there yet, but “on my way.”

“‘On My Way’ is a song we wrote as a reminder to ourselves that it’s okay to be a work in progress. It’s okay to not have all of the answers. It’s okay to fail,” says Zach while Garrett echoes, “we want fans to take away that it is perfectly normal to not be perfect, and that it is important to embrace and be true to yourself.”  Colton says of writing the song, “it’s one of the most vulnerable songs we’ve ever written. It helped us through one of the most uncertain times of our life, so we wanted to release this song and we hope that it can help other people too.”

“I’m on my way / Wherever I go / I’ll keep on walking this slow winding road / And, I ain’t afraid / To love or to change / And be someone better than I was yesterday / I ain’t there yet, but I’m on my way,” they sing throughout the chorus of the vulnerable track.

Listen To Restless Road’s “On My Way” Below.

Restless Road is no doubt known for bringing high energy with songs like, “Highlights,” “Bar Friends,” and “Hometown Tonight.” But as far as the production goes, “On My Way” finds them slowing it down and incorporating sweeter sounds like stunning three-part harmonies, picking acoustic guitars, soft percussion, and steel guitar.

Ahead of their release, Restless Road, who solely co-wrote the song, proving their ability to captivate as storytellers, took to social media multiple times to tease “On My Way” with uplifting messages.

“If you ever feel like this just know you’re not alone!!” They captioned on Instagram in December of 2022, sharing a video of them performing a snippet of the song acoustic. “We wrote this song because we got tired of being so hard on ourselves. It’s ok to not have it all figured out. One step at a time. If you want to be the first to hear On My Way when it releases you can pre-save it now in our bio!!

The group, who returned to the forefront just a few years ago following the swapping in and out of bandmates, also used the track to highlight their road to success so far.

“Three years ago, we were working in restaurants, bars, and construction. [Now] We get to tour around the world with our favorite country stars and play for thousands every night,” they captioned a clip. “We’ve gained over 3 million followers on social media and met so many fans. We get to release songs that we love, and they’ve been streamed over 150 million times.”

“This has been the best year of our lives,” they added in a second Instagrammed clip. “We performed on The Bachelor, went to the ACM Awards,  played the Houston Rodeo, played the Grand Ole Opry, went on our first-ever headlining tour… played CMA Fest in Nashville… played at fairs and festivals and went on tour in Australia.

“This is the most vulnerable song we’ve written,” they admit in a caption. “And it’s a reminder for us that we’re still learning as adults.”

On the day of its release, Restless Road shared the cover art for the track, which features what appears to be childhood portraits of all three members of the band.

“Our favorite song we’ve ever written is out now,” they write. “Listen, sing along, and remember it’s okay to not have it all figured out, as long as you’re on your way. https://rr.lnk.to/OMW #OnMyWay.”

“On My Way” is the follow-up to “Sundown Somewhere” and “Growing Old With You.” Restless Road is currently overseas as part of Kane Brown’s Drunk Or Dreaming Tour. 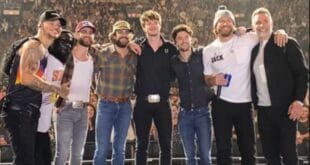 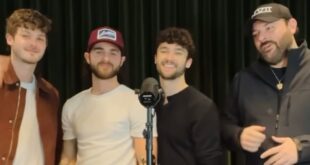