“Well, listen, obviously we’ve lost a lot of legends, but there’s nobody in this category — or really, any category — that would be here without Alabama and we just lost Jeff Cook. It’s got me thinking, I’m so grateful — there’s nothing like being in a band,” said Matt Ramsey, lead vocals. “I’m so grateful to have my friends and I can’t imagine losing one of you guys and I’m so happy to be able to make music and be honored. We love you and we just love the opportunity to do what we love doing, so thank you guys so much for allowing us to do what we love doing. Thank you.”

Jeff Cook, founding member and legendary guitarist from country supergroup ALABAMA, passed away on Monday, November 7 at the age of 73.

Old Dominion was also up for the Album of the Year award with Time, Tequila & Therapy.

Prior to the award show, Trevor Rosen — guitar and keyboards for the band — shared a lighthearted post via Instagram. Rosen posted screenshots of a text conversation between him and his daughters as they wrote “You better get Morgan Wallen’s phone number” and “Random, but if you see Cody Johnson at CMAs, can you like get him to say hi in a video or something?”

Hopefully a CMA Award is enough for the Rosen family!

The five-piece band recently announced their highly anticipated NO BAD VIBES TOUR, set to kick off in the spring of 2023. Hot on the heels of a very successful run on Kenny Chesney’s Here and Now 2022 Tour — where Old Dominion opened the show at twenty-three stadiums over the summer — their headlining tour is set to kick off January 19, 2023 at the Ford Center in Evansville, IN and end on July 30th in Lake Tahoe, NV.

Previous Brothers Osborne Win Duo Of The Year, John Reveals Wife Lucie Is Pregnant: “We’ve Got Twins On The Way!”
Next Cody Johnson’s “‘Til You Can’t” Named CMA Single of the Year: “I’m So Grateful To Be Here… God Bless Country Music” 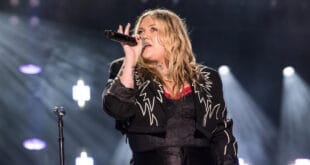 Elle King shared a health update with fans after she canceled several recent appearances. The …