Critically acclaimed California-based singer/songwriter Matt Costa is celebrating the upcoming release of Santa Rosa Fangs, his fifth full-length album—and first in five years—with a premiere of the single “Sharon” at The Big Takeover; read HERE and share HERE. Costa notes that “Sharon” “is the rock song I’ve been dying to write from the start of my career.”
Santa Rosa Fangs is due May 18 on Dangerbird Records. The album is available for pre-order at http://radi.al/SantaRosaFangs.
Costa also recently premiered the album’s first single, “I Remember It Well,” via Billboard, who hails Santa Rosa Fangs as “one of the most ambitious projects Costa has taken on.” Stream/share the track and read Costa’s interview with Billboard at http://bit.ly/2CUJyIW.
Costa is set to tour the east coast in support of the new record this spring. See below for a list of performances; additional tour dates to be announced shortly.
Produced by Peter Matthew Bauer (The Walkmen) and Nick Stumpf (French Kicks), the songs on Santa Rosa Fangs center around a fictional young woman named Sharon, her two brothers Ritchie and Tony, and their story of love, loss and coming of age in California, replete with long distance love affairs and nostalgic romances. Rather than setting out to create a specific narrative, Costa began noticing a theme in the new songs as he wrote them: an unconscious embodiment of the surroundings in which he himself had grown up.
“I’ve interwoven my own stories into a fictional idea of what Santa Rosa Fangs is, from my own time spent living in Northern and Southern California and years driving up and down the coast, seeing the landscape and where life can pull you within one state,” Costa explains. “It’s the characters’ story and my story, too, contemporary but still tortured by the past. It’s a window into a time period but spoken as if it’s the present. The beauty of love and loss doesn’t have a date on it; it’s timeless.”
Santa Rosa Fangs follows Costa’s 2013 self-titled effort, which was hailed by MTV News as “a full-blown orchestral-pop affair, with strings and horns urging the songs to grand heights and dramatic dynamic shifts,” while American Songwriter included it in their Top 50 Albums of 2013, noting that “everything is meticulously arranged, often with strings, horns and layered backing singing. They effortlessly capture a sweet, innocent, truly captivating folk pop whimsy that never seems forced, pretentious or outdated, even with its obvious reverence for an earlier time.”
In the early 2000s Costa was on his way to becoming a professional skateboarder when he was derailed by a serious injury. He changed his focus to his songwriting and an early demo found its way to No Doubt’s Tom Dumont, who ultimately produced Costa’s early recordings. In the time since Costa’s last full-length record he has kept busy by soundtracking the award-winning documentary Orange Sunshine and independently releasing a series of EPs. 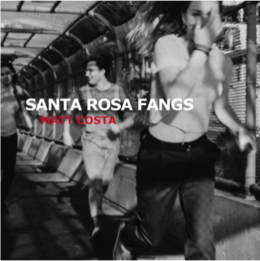