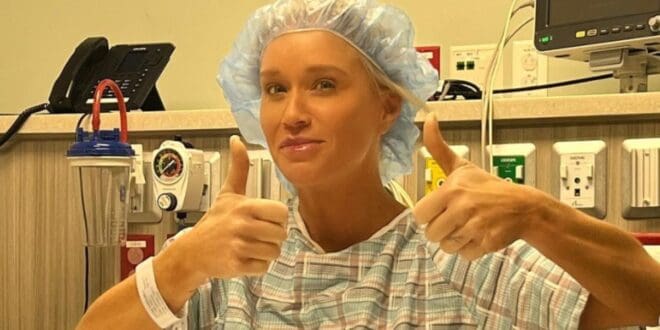 The Best Bad Influence clothing line owner took to social media on Monday (Nov. 14) to share the news with her followers via a photo of her giving two thumbs up in front of medical devices from her hospital bed ahead of her surgery at The Bone And Joint Institute of Tennessee.

“Well…unexpected hip surgery….but I got the best care and surrounded by the most selfless friends ever!” Caroline captioned the image on Instagram.

In addition to sharing a photo from the hospital bed, Caroline also shared a clip after her surgery in her bed as she recovers. As she recovers, it seems she will have to use a walker to help her, which was seen at her bedside in the second slide of her Instagram post. The walker was decorated in a comical way with hilarious stickers, including one that read “Y’all Need Jesus,” and more.

The country singer’s wife didn’t share any details of what happen or why she had to have a sudden hip surgery.

Caroline joined her husband Luke Bryan on the red carpet at the 56th Annual CMA Awards on Wednesday, November 9. Bryan served as a co-host of the coveted awards ceremony alongside NFL Hall of Famer Peyton Manning and also performed “Country On” during the show.

The beloved country couple were all smiles as they walked the red carpet. Bryan wore a classic black suit with a bow tie, while Caroline opted for a leopard print dress with a halter-neck and keyhole detail and added some sparkle to her look with a silver studded belt.

Caroline and Luke Bryan have been married for over 15 years and share two children together, Thomas (Bo) Boyer Bryan and Tatum (Tate) Christopher Bryan. They also adopted three of their nieces and nephews, Jordan Cheshire, Kris Cheshire, Tilden Cheshire, after a family tragedy.

During a Jockey promotional clip, Luke Bryan explained how he met his wife Caroline.

“We were at the local hangout Dingus McGee’s and I’m sitting there and she walks in and I’m like, it was packed, so you got to figure out how to navigate through the crowd and get… You gotta figure out your angle.” Bryan explained. “You know, how you’re gonna… what are you gonna do? What’s your main move? And somehow I made my way and we started talkin’ and then you know, the next morning I woke up and I was like ‘oh my god’ like… That’s… That’s who I’m going after right there so…”

Caroline then said after her and Bryan’s first meet, it took her several to realize that the person she met was actually a real character as his personality was so big.

“Just this big personality with this loud mouth comes up and I just like… it took me a couple of days to realize that this was a real character,” Caroline shared. “This wasn’t just some drunk college guy, this is how he acts but then we just I mean but then I just fell in love with his personality and everything.

When it comes to The Bryan’s, there is honestly never a dull moment. From pranks and work to their children and lots of love, they have a one-of-a-kind relationship and it works for them as they have over 15 years of marriage under their belt.

Luke Bryan recently shared a brand-new song called “Prayin’ In A Deer Stand” as his single “Country On” continues to climb the charts at Country radio.

Co-written by Bryan alongside Nicolle Galyon and Jimmy Robbins, “Prayin’ In A Deer Stand” finds the Georgia native reflecting on life and his faith while hunting.

“I do my prayin’ in a deer stand / On my back forty church / Thinkin’ about life on a cold sunrise / Yeah, that’s my heaven on earth / Me and God in a cornfield / Gotta think He understands / I might miss a Sunday from time to time / But I get there when I can / We’re all good in these woods / ‘Cause here I am, prayin’ in a deer stand,” Bryan sings in the chorus of the tender ballad.

“This is such a personal song to me,” Bryan shared of the tune. “The world can be a busy place and I, like a lot of people, have a ton of different things going on, but getting to be outside, it grounds and reenergizes me. There is just something about it that never gets old.”

The five-time Entertainer of The Year also announced the return of his annual concert vacation, Crash My Playa, which will take place January 19-22, 2023, in Riviera Cancun, Mexico at the AAA Four Diamond awarded resort, Moon Palace Cancún.

The “Country On” singer revealed that he will headline two of the four nights and announced that Chris Stapleton and Cole Swindell, will also take the stage for a headlining concert.

“Oh my gosh this line up! Some dear friends and new friends but regardless, what an amazing treat for the fans,” Bryan shared in a press release. “Everybody rest up and get ready for these four beachside hangs.”

Dustin Lynch will make his return to host and perform during a very special pool party.

Additional artists will be announced for the event in the coming weeks.

Previous BREAKING: Travis Tritt Issues Health Update After Being Forced To Cancel Tour Due To Injury
Next Luke Bryan Calls Out Katy Perry Over Thomas Rhett Duet: “My Feelings Were Hurt” 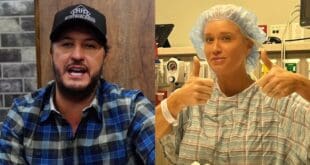