As they prepare for the start of their 2019 tour dates next week supporting their new album Frames Per Second, instrumental jamband Lotus has released a stand-alone in-studio video for album track “Fortune Favors.” The entire album, which the band dropped as a surprise to fans on December 5th, 2018, was tracked live at Rittenhouse Soundworks in Philadelphia with cameras rolling for an accompanying documentary that showcases the band in a pure, raw form performing live in the studio. PRESS HERE to watch the video for “Fortune Favors,” which first debuted this morning with Live For Live Music.

“‘Fortune Favors’ originated from some bits of music written for our 2016 Halloween ‘Space Disco’ set,” shares bassist/composer Jesse Miller. “We had the basic chord change and some of the synth patterns. I had been listening to a lot of Alice Coltrane music and other 70s spiritual jazz at the time. In many of those records, musicians were bringing in Indian instruments into a free-jazz context and a droning tambura was often used. So, I was drawn to that sound to start off the song. The melodies move from a basic western minor scale with disco oriented chord change into a section that uses more half-steps (flat 9, major 3rd, minor 6 for music theory nerds). Those scales give a kind of Middle Eastern sound. The modular synth bridge pushes the chromaticism even further. I like that it functions like a guitar solo in the arrangement, but with the precision of a sequencer. The guitar, instead, is used to add texture with a reverse delay effect. Fortune favors the bold.” 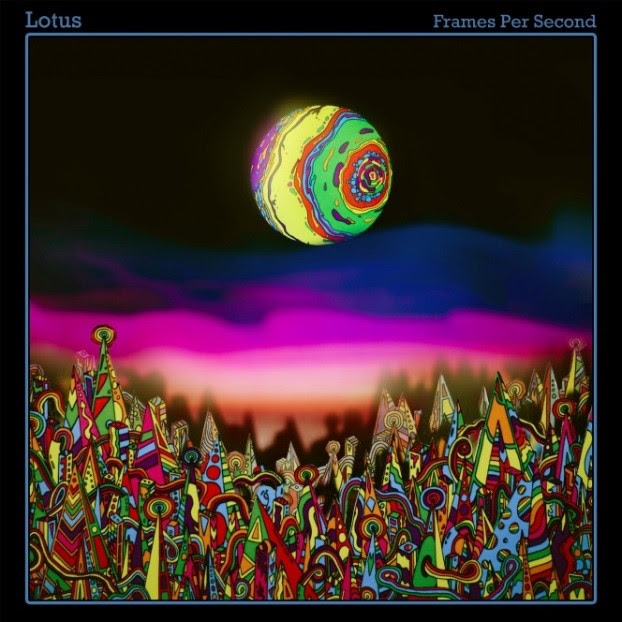 Frames Per Second is an all-instrumental 19-song audio and video experience, written and produced by Jesse and Luke Miller and available digitally and as a 3-LP vinyl set with video downloads via the band’s own label. PRESS HERE to listen. Instrumental jazz-funk, Norwegian space-disco and psychedelic rock are just some of the sounds that influenced the expansive project. Lotus aimed to incorporate psychedelia into the album’s sound by combining hypnotic beats with unexpected harmonic or timbral turns. The band also put their own spin on different classic funk styles, like 70s Fusion, West Coast G-Funk, Instrumental Soul, Boogie, and 80s Electric Funk. Track listing for Frames Per Second can be found below.
To support Frames Per Second, Lotus – Mike Greenfield (drums), Jesse Miller(bass, sampler), Luke Miller (guitar, keys), Mike Rempel (guitar) and Chuck Morris(percussion) – is hitting the road, beginning next weekend with back-to-back headlining shows in Philadelphia on January 25 and 26. The quintet will also be performing multiple nights in the following markets: Buffalo (two shows: February 8-9), Pittsburgh (two shows: February 15-16), Brooklyn (three shows: April 4-6), Washington, DC (two shows; April 19-20) and the Denver area (two shows: April 26–27), culminating with a headlining show at Red Rocks Amphitheatre on April 27th featuring special guests Ghostland Observatory, Jade Cicada and Magic Beans; PRESS HERE for more info and see below for full list of upcoming tour dates.
Lotus has always been difficult to define musically; an instrumental jamband that has favored groove-based improvisation instead of gaudy solos and noodling. Influences of classic electronic dance music, funk, post-rock and dance-rock have all made their way into the Lotus sound. Over the years, their unique musical blend helped forge a new path in the jamband landscape, influencing many younger bands in the scene. Albums such as their debut studio release, Nomad (2006) have become a touchstone for how to organically fuse elements of electronica with jam music, and the band continues to evolve through each tour and album bringing in new sounds and writing styles. Approaching two decades together, Lotus has toured actively throughout the US working their way up from dingy basement clubs to world-class venues such as Red Rocks. They’ve become festival favorites, playing everything from Bonnaroo, Camp Bisco and Outside Lands to Ultra Music Festival and Electric Forest, building a hyper-loyal following along the way. A Lotus live show is an experience, a uniquely crafted and improvised set taking everyone, the crowd and band, on a journey.
Frames Per Second Track Listing
1.”Cold Facts”
2.”Gasoline”
3.”Bug Love”
4.”MacGuffin”
5.”Aquamarine”
6.”Stranger Danger”
7.”Cosmosis”
8.”Faceblind”
9.”Forgotten Name”

HARDY surprised fans at his Aug. 4 concert in Atlanta by bringing a special guest …