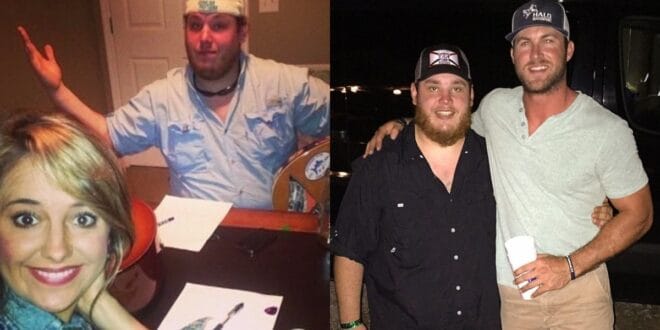 Lainey Wilson and Riley Green are both gearing up to serve as support on Luke Combs‘ massive 2023 world tour. Ahead of the festivities, both singers shared throwbacks with the “Doin’ This” singer on social media.

First up, Wilson shared a carousel post to Instagram featuring photos of her, Combs, and hit songwriter James McNair. Wilson also shared a video of her and Combs singing together in the studio in the post.

“Damn we’ve come a long way @lukecombs… time has done us well,” Wilson wrote. “Congrats on kickin off your tour tonight! Can’t wait to meet ya out there in less than a month and join for the stadium world tour in the spring and summer. Y’all grab your tickets!,” she continued, adding the hashtags #middleofsomewheretour and #lukecombsworldtour.

“In honor of the @lukecombs World Tour – Here’s a throwback to 2016 when we still rode in vans to get to shows. Tag your runnin buddies and Get tickets while they last,” he said, including the hashtags #weouthere #countrymusic #comeon #wayback #worldtour and #throwback.

Combs announced plans for his 2023 world tour, which features support from Wilson and Green, on Sept. 8. Flatland Cavalry, Brent Cobb, Cody Johnson, and Lane Pittman will also serve as support at select shows.

“3 continents. 16 countries. 35 concerts. This is my 2023 World Tour! ” Combs said on Instagram. The tour is set to kick off on Mar. 25 at AT&T Stadium in Arlington, Texas, with stops planned in Nashville, Kansas City, Ireland, Germany, Australia, and more before wrapping up at the O2 Arena in London on Oct. 19.

Prior to his 2023 world tour, Combs is hitting the road this fall on his Middle Of Somewhere Tour. The tour, which opened on Sept. 2 in Bangor, ME, features support from Wilson, Morgan Wade, and Jordan Davis.

Combs released his third studio album, Growin’ Up back in June. The album consists of 12 tracks, including, “Doin’ This,” “The Kind Of Love We Make,” and “Tomorrow Me.”

In his personal life, Combs and his wife Nicole welcomed their first child, son Texas Lawrence on Father’s Day (Jun. 21) of this year.