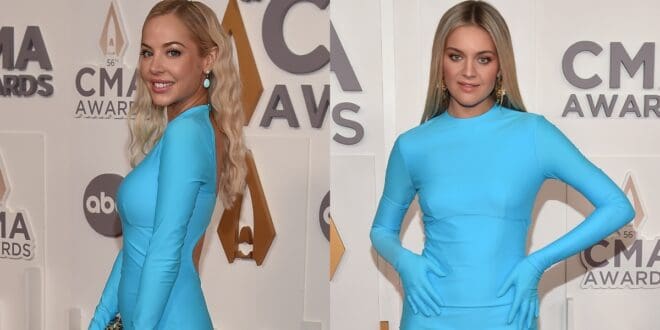 The 56th Annual CMA Awards was no doubt one for the books! But, aside from the show itself, one of the biggest reasons folks tune into Country Music’s Biggest Night – and any other awards show for that matter – each year is to catch all of the interesting red-carpet looks worn by some of the biggest celebrities.

And, country music artists certainly turned up the glam ahead of the yearly ceremony, including Kelsea Ballerini, who donned a skin-tight sky-blue Balenciaga gown – one that most people would likely assume she could only pull off.

However, in a surprising twist, that dress was actually a popular choice of attire for the evening because the “Heartfirst” singer wasn’t the only star modeling the garment.

The jaw-dropping gown, which features details such as a cut-out design in the back, long sleeves, a high neckline, and, according to People, a long train from the label’s fall/winter 2022 collection, complimented both artists, as they graced the carpet, which was chock-full of nominees, presenters, and artists on hand to support all of the night’s winners.

Both Ballerini and Porter added their own personal touches to their respective looks. Ballerini, 29, kept her hands warm with built-in gloves. The two-time CMA Award winner also straightened her long blond locks and matched her heels to the color of her dress.

“I’m blue da ba dee da ba daaaa 📸 @catherinepowell,” Ballerini, who flew solo for the evening following her public split from Morgan Evans, captioned a post on Instagram before heading out for the special occasion.

Porter, 32, meanwhile, tucked her golden tresses behind her ears to allow her turquoise earrings to show. She chose not to sport gloves with her look.

“My first ever @cma awards 🥹 Tonight on ABC at 8/7c #cmaawards,” Porter, who was accompanied by her husband, Jake Etheridge, debuted her look of the evening on Instagram.

“Sitting on my 5 am flight in sweatpants thinking how was this last night 🤓 #cmaawards ,” she captioned the next morning.

Ballerini also was quick to shut down comments from people who caught the twin outfits. In her Instagram stories, she told viewers, “It’s giving, blue is the moment. It’s giving bright minds think alike. It’s giving, I immediately changed into a green dress because she looked so good in it. It’s giving, don’t you dare do a ‘who wore it better’ or put a side-by-side. It’s rude.”

Porter reposted Ballerini’s response to those pointing out the dress, and wrote, “I love you babe” before calling Ballerini “a true queen.”

Interestingly, Kim Kardashian, 42, was the first to put on the bold dress. The reality TV star and socialite posed for cameras earlier this year while wearing the bodycon ensemble at the 2022 Vanity Fair Oscar party in Los Angeles. Kardashian opted to wear her hair up in a tight ponytail while outfitted in the gown.

Ballerini had a busy night at the 2022 CMA Awards. Midway through the three-hour broadcast, she performed her sassy song “You’re Drunk, Go Home” alongside Carly Pearce and Kelly Clarkson. The three-person collaboration appears as the twelfth track on her current album entitled Subject to Change. For the triple-threat duet, Ballerini switched her look, wearing a baby doll dress and fashionable, floral knee-high boots. She kept her hair long while she stood center stage, flanked by her fellow female superstars.

Ballerini also earned a nomination heading into the event. She was up for Single of the Year for her duet with Kenny Chesney, “half of my hometown.” Other artists in the running for that prize included, Cody Johnson’s “‘Til You Can’t,” Jordan Davis and Luke Bryan’s “Buy Dirt,” Pearce and Ashley McBryde’s “Never Wanted To Be That Girl,” and Chris Stapleton’s “You Should Probably Leave.” Johnson’s “‘Til You Can’t” nabbed the trophy – a first for Johnson in the category. 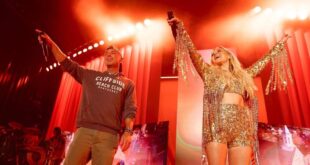 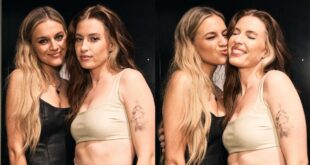