Guns N’ Roses continues to add world class talent to their historic Not In This Lifetime Tour. Grammy Award®-winners Wolfmother will join the tour on Tuesday, July 12 and Thursday, July 13 while Tyler Bryant & The Shakedown will perform on Wednesday, July 6. These acclaimed artists join the previously announced Alice In Chains, Lenny Kravitz, Chris Stapleton, Skrillex, The Cult and Billy Talent. Demand for tickets to the Not In This Lifetime Tour continue at an unprecedented pace as additional shows were recently announced including Chicago (July 3), Boston (July 20), New York City (July 24) and two brand new dates in Los Angeles (August 18 & 19). A full list of tour dates is below.  Critics have also hailed the tour as one of the best of the summer.

“Guns N’ Roses Thrill in Detroit With Electric Reunion Tour Opener… Rose continuously thrilled with his immense vocal range – especially seated at the piano for “November Rain” – which was always precise and extraordinarily fresh despite coming off of a string of dates with AC/DC, where he filled in for vocalist Brian Johnson.” – Rolling Stone

“GNR is in top form as it enters a potential new lifetime.” – Washington Times

“GNR made good on the moment, conjuring the loose, tattooed, swaggering power of the band’s golden years without loitering in nostalgia and with just enough tattered edges to keep it all real.” – Detroit Free Press

More than 2 million fans will be part of the most celebrated music event of the past few decades with the tour of the summer, Guns N’ Roses’ Not In This Lifetime Tour!!  GN’R launched their return in spectacular fashion beginning with the Troubadour in Los Angeles on April 1 for their first live performance in more than 20 years followed by back-to-back arena shows in Vegas filling the house to the rafters, then Coachella for two weekends (April 16 and April 23) including a trip south of the border for two sold out stadium shows in Mexico on April 19-20…April saw almost a half million fans alone in North America!  Guns N’ Roses’ are Axl Rose, Duff McKagan (bass), Slash (lead guitar), Dizzy Reed (keyboard), Richard Fortus (rhythm guitar), Frank Ferrer (drums), and Melissa Reese (keyboard).   Following the group’s 1985 formation, Guns N’ Roses injected unbridled, unrivaled, and unstoppable attitude into the burgeoning Los Angeles rock scene. The spirit went on to captivate the entire world with the release of their 1987 debut Appetite for Destruction –the best-selling U.S. debut ever, moving 30 million copies globally.  In 1991, the seven-time platinum Use Your Illusion I and Use Your Illusion II occupied the top two spots of the Billboard Top 200 upon release. Over the course of the past decade, Guns N’ Roses have performed sold out shows and headlined festivals worldwide following the critically acclaimed release of 2008’s RIAA platinum-certified Chinese Democracy. Six studio albums later, Guns N’ Roses are one of the most important and influential acts in music history and continue to set the benchmark for live performances connecting with millions of fans across the globe.

Led by Andrew Stockdale, Wolfmother have amassed a global fan base, played to packed-house crowds around the world, delivered show-stealing sets at star-studded festivals like Coachella, Lollapalooza, Bonnaroo, Isle of Wight, Rock am Ring and Reading and Leeds, and have been invited to share stages with rock icons Aerosmith, AC/DC and now the highly anticipated reunion of Guns N’ Roses. For their induction into the UK Music Hall of Fame, Led Zeppelin personally invited Wolfmother as their guests (the band showed their appreciation by delivering an electrifying cover of “Communication Breakdown”). The much-anticipated VICTORIOUS is an exhilarating demonstration of the range and depth of songwriter/vocalist/guitarist Andrew Stockdale’s artistry. Recorded at Henson Studios in Los Angeles with two-time GRAMMY® winning producer Brendan O’Brien (Pearl Jam, AC/DC, Chris Cornell, Bruce Springsteen), the songs are edgy, inventive and uncompromising and rank among the band’s best ever. In addition to vocals, Stockdale played guitar and bass and brought in Josh Freese (Nine Inch Nails, Bruce Springsteen, A Perfect Circle) and Joey Waronker (Air, Beck, REM) to split drum duties.

Tyler Bryant & the Shakedown is a rock and roll band born of Nashville, TN. Their sound is a soulful patchwork of roots-infused melodies and muscular riffs, all woven tightly with the thread of their alternative psychedelic mystique. It’s as rambunctious, raw and real as rock & roll gets these days. In 2013 the band released “Wild Child,” their first full-length album, which was featured in Rolling Stone, NYLON Magazine, Paste Magazine, Interview, and many more. The band made its television debut on Jimmy Kimmel LIVE in support of the record that helped gain them a cult like following. Tyler Bryant & the Shakedown recently inked a deal with John Varvatos/Republic Records and got right into the studio with celebrated producer/engineer, Vance Powell (Jack White, Seasick Steve). The band release their latest EP, The Wayside, last year to critical acclaim.

GUNS N’ ROSES NOT IN THIS LIFETIME TOUR

All dates, cities and venues below subject to change. 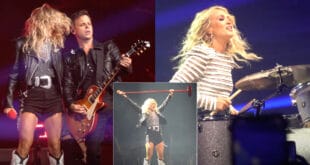 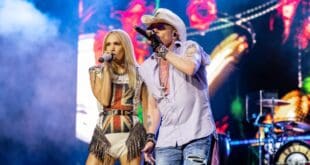 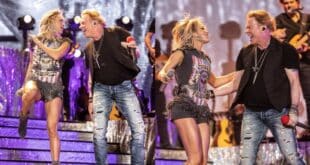