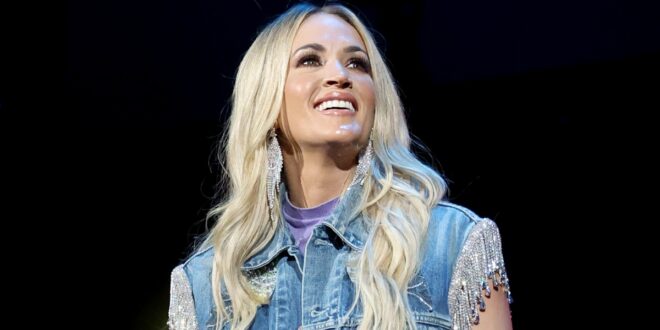 Carrie Underwood is about to embark on her massive The Denim & Rhinestones tour in support of her current album of the same name. And, that means she will be spending a lot of time on the road.

The country music superstar and 2022 AMA Favorite Female Country Artist nominee recently caught up with Extra, where she revealed whether or not she’ll be bringing her family along for the ride when the tour officially begins.

Underwood spoke about her two sons, 7-year-old Isaiah Michael and three-year-old Jacob Bryan, in particular, who have joined her on the road for past tours including her Storyteller Tour and Reflection residency in Las Vegas.

This time, she says she will be leaving the boys behind – at least for the majority of the trek.

“Well [on] this tour, I think for the most part, they’ll be home,” Underwood told Alecia Davis. “On the last tour, we set up a playroom in the venues that had, you know, crayons and paint, some toys and things like that. They would kind of have their own little space to get away. On my last tour, my youngest son was three-months-old when we were on the road. So he was just a little nugget, you know?”

Perhaps letting her sons stay home is for the best as the kids are getting to an age where they are starting to be – well, boys.

“They’re seven and three. Everything with them is farts and wrestling,” Underwood tells Country Countdown USA. “I wish I could have them turn it off at the table. But it always ends up there.”

“They’re both in school, Isaiah learned how to read in the past few years. He’s our sensitive guy,” she says. “He loves creepy shows on TV. Jake’s a different animal than Isaiah. Sometimes he chases him and beats up on his older brother.”

And, while being away from her family will be tough, there will be some benefits to having her space all to herself.

“It’s easier to maintain a routine when I am on tour,” the 39-year-old star explained. “I don’t have a house to clean, I don’t have kids to cook for because there is catering and room service.”

Underwood didn’t speak on whether or not her former ice hockey star husband Mike Fisher will be at her shows. But, it may be safe to say he will have to be on baby duty as Underwood’s tour will take her through 34-cities.

Speaking of Fisher, the former athlete recently took to Instagram to showcase his eldest son, Isaiah, showing off his acting skills while dressed up in a hilarious-looking Halloween costume.

“Someone’s ready for Halloween!!” Fisher captioned the post, which features the child decked out in elderly man attire and wearing an oversized old man mask.

Isaiah shows off his comedic-side by goofing off in his parent’s house, incorporating a few funny dance moves into an impromptu performance that shows he has inherited his parent’s sense of humor.

“Let’s have a dance party, come on,” Isaiah says before getting in character to drop to the floor.

The act, of course, has his dad laughing out loud.

Underwood’s The Denim & Rhinestones tour will kick off on Oct. 15 with its first show in Greenville, South Carolina. The tour runs through March 2023. Country star Jimmie Allen will be joining her as the special guest on the tour.