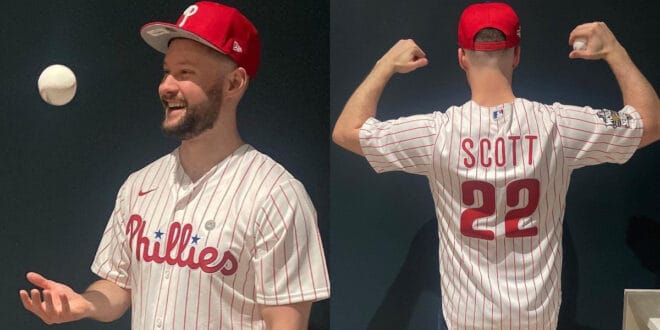 Calum Scott “Super Proud” That “Dancing On My Own” Has Become The Phillies Anthem: “Manifesting A Game 5 Win Tonight”

Calum Scott is “super proud” that he and Tiēsto’s version of Robyn’s 2010 classic hit, “Dancing On My Own,” has become the official anthem of the Philadelphia Phillies in the playoffs and now the World Series.

On Thursday (Nov. 3), Scott called into the Philadelphia based radio station 96.5 TDY to chat with Audacy host Bennett about the tune being the theme song of the Phillies at the moment.

“Look, obviously the original writer of the song, Robyn, huge Robyn fan, this song made me feel a certain way, which is why I sang it,” Scott told 96.5 TDY. “So, for my rendition to have other moments around the world not just within music but within sport is just unbelievable to me.”

He went on to explain that while he’s upset that he’s unable to be in Philly to partake in the celebratory festivities, he hopes to visit The City Of Brotherly Love in the near future as he loves all the videos he seen of fans singing his song.

“I see all these videos, just like hundreds of people singing it, it’s just amazing. It makes me want to be over in Philly and just soak up all the atmosphere, and soak up all the energy,” Scott continued. “It sounds like Philly fans are some of the proudest fans when it comes to their baseball team. I’m gutted that I’m not there celebrating with you all every game that we’ve won, but fingers crossed I’ll be on my way over there soon.”

Scott then shared that he is “super proud to be a part of something that feels so good and everybody’s enjoying and celebrating.” Later adding, “It’s about time that we’re out there celebrating together arm-in-arm — it feels good!”

On Thursday evening (Nov. 3), Scott shared photos wearing a Philadelphia Phillies jersey with his name emblazoned on the back with the number 22 as he cheered on the Phillies.

Throughout the post-season, the Philadelphia Phillies have made “Dancing On My Own” their official theme song and are often heard blasting the tune in their locker room ahead of games. A video of the team singing the tune at the top of their lungs has even surfaced online and has since gone viral, which can be seen below.

The Phillies all BELTING out Robyn's Dancing On My Own is killing us 😂😭 pic.twitter.com/CObR5RigAj

Scott’s version of the anthemic tune has also been played a countless amount of times during the post-season games.

Earlier this year, after the Phillies won the National League Championship Series, a fan Tweeted Scott on Twitter asking him if he would be available to sing the tune in Philadelphia at the World Series. He quickly replied, “I AM DOWN!!” However, the singer hasn’t been able to perform the tune at a game yet.

Four years ago, the hitmaker visited the 96.5 TDY performance lounge in Philadelphia to perform the tune.

The Philadelphia Phillies are currently vying for the World Series title against the Houston Astros. Each team has won two games out of the seven total games and need four wins to take the title as the World Series Champions.

Previous Carrie Underwood Reveals How She Deals With Internet Trolls & Opens Up About Her Mental Health
Next Kane Brown, Morgan Wallen, Miranda Lambert and HARDY To Headline Gulf Coast Jam 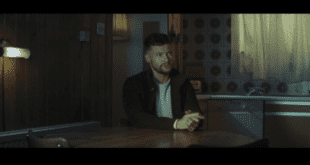 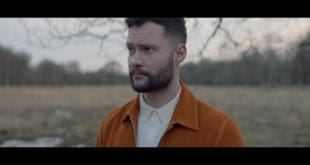 CALUM SCOTT Premieres The Video for “What I Miss Most” Today 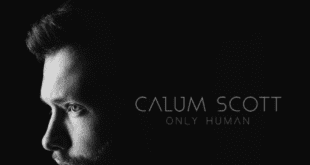