The band is on tour in support of their recently released album Age of Unreason (May 3).  The critically acclaimed record offers a fiery and intensely relevant musical response to the times and “Given the political madness that seems to have gripped the world these days, Bad Religion is as relevant as ever.” says Kerrang!. There is a stylistic consistency to the band’s iconic and influential sound – hard fast beats, big hooks, and rousing choruses, yet each new song remains distinctive, utilizing composition, melody, and lyrics to deliver a unique narrative consistent with the band’s longstanding humanist worldview. 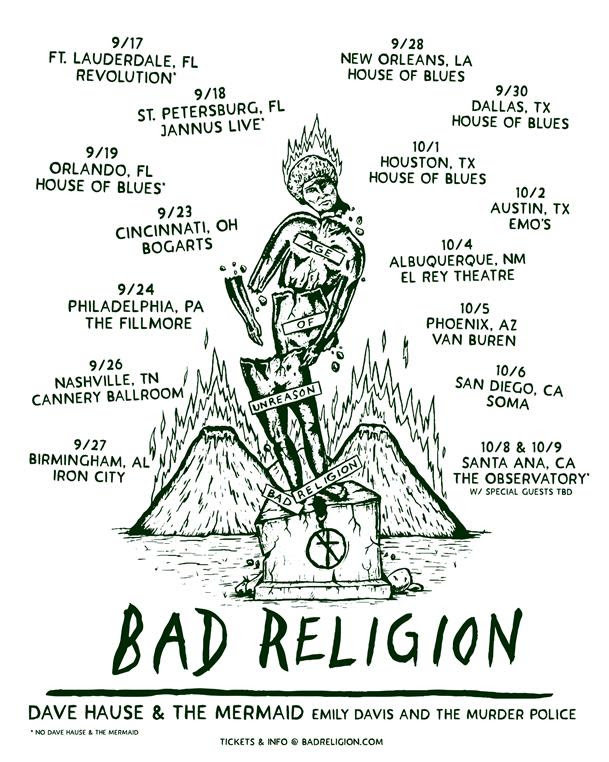 Acclaimed Los Angeles punk rock band Bad Religion’s new album entitled Age of Unreason is out now on Epitaph Records. Since the group’s formative years they have steadfastly advocated for humanism, reason, and individualism. Now, when these values are in decline and nationalism and bigotry are on the rise, Bad Religion’s message has never been more essential. Age of Unreason delivers a powerful and inspired response – a political and deeply personal treatise on all they believe in.

“The band has always stood for enlightenment values,” co-songwriter and guitarist Brett Gurewitz explains. “Today, these values of truth, freedom, equality, tolerance, and science, are in real danger. This record is our response.”

The songs on Age of Unreason are both furious and meticulously crafted. There are references to contemporary events; racist rallies, Trump’s election, the erosion of the middle class, Colin Kaepernick’s protest, alternative facts, conspiracy theories, and there are homages to the literary and philosophical works that have long inspired the band.

The track “Chaos From Within” uses the band’s iconic fast, powerful and melodic sound to examine the current border wall controversy with the lyrics, “Threat is urgent, existential / with patience wearing thin / but the danger’s elemental / it’s chaos from within.” As co-songwriter and lead singer Greg Graffin says, “Throughout history, walls have been used to keep the barbarians out, But it seems to me that the truly barbaric aspect of a civilization is the chaos that comes from within.”

Age of Unreason is Bad Religion’s 17th studio album and was co-produced by Carlos de la Garza. It is a timely work of immense power and one of their very best. Society’s step backwards has propelled the legendary band decidedly forward. There is an elevated craft in the way the song “Candidate” vividly evokes the current president, “I am your candidate / I am bloody lips and makeup /I’m your caliphate, opioids and mutilation / a celebrity and my name is competition.” Another track, entitled “The Approach,” addresses the possible demise of democracy with the lyrics, “There’s a moral and intellectual vacuum / and you’re right to be lookin’ askance / philosophically moribund, revolution hasn’t a chance.”

This record is both a dire warning and testament to resilience. The overall message being – seek truth about the world and oneself. As Graffin, who holds a PhD in the history of science, says, “When I saw all these headlines about how terrible our world had become, I started doing a lot of reading. I read about the French Revolution, the American Revolution, the Civil War, and I started to recognize that this is a pattern of history and something we should never venture into. There are ample warnings against it. Every school child should know this but it’s hard to get people to read about these things. Maybe this album can help. Because right now, with social media, we are just playing a version of kill the guy with the ball.”

Morgan Wallen Talks Son Indigo Wilder, Co-Parenting With KT Smith, & What He Enjoys Most About Being A Dad